Made It! Chilaquiles Soup 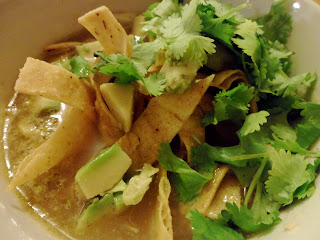 The weather has been rainy and cold in Victoria lately. As a student, I love to take soups to school to have a hearty, warm meal in the middle of my day that takes literally no time to prepare in the morning. This Chilaquiles is a great Mexican twist on the classic chicken noodle soup that will definitely be making many reappearances on my staple menu.

I pretty much followed Lisa's recipe, but instead of placing all the ingredients in the dutch oven first, I roasted the peppers and tomatillos in a 450 degree oven while the onions caramelized. After the peppers and tomatillos had a nice charcoal-y skin, I removed them from the oven to cool. I then peeled as much of the skin off as I could. Once the onions caramelized, I just added the peppers, tomatillos, and chicken stock. It couldn't have been easier! I accidentally added too much serrano pepper so at first my soup was incredibly spicy. I just added more and more broth until I achieved the flavor I wanted. The good news...tons of left-overs! I froze half of the soup base in large containers and with the other half of the soup base I added the pulled chicken. I froze individual portions of the chicken soup so in the morning I can quickly heat up the soup, pour it into my thermos, and head out the door. I fry my own tortilla chips using corn tortillas cut into strips. For school, I just pack an extra baggie of chips, either my own or store-bought, so they don't get soggy en route. This soup is delicious, easy, and most importantly, healthy! I hope you give it a try.
Posted by Sasha at 12:52 PM

Email ThisBlogThis!Share to TwitterShare to FacebookShare to Pinterest
Labels: Chicken, Chile, Made it, Soup