We have had a wonderful week in Laos of swimming in waterfalls, riding elephants, boating upthe Mekong, and exploring the numerous Wats. All this activity left us hungry, and we enjoyed feasting our way through the country. And since we have been eating Lao food all week, I thought it would be a great time to post this particular recipe. I had made this dish before I left DC, after being inspired by the Lao meatballs from the Adams Morgan Day street fair a couple of months ago. After tasting real traditional Lao food here in country, I will admit this recipe is not completely authentic. However, it is very close to what I ate in DC and very reminiscent of the flavors here in Laos. More importantly - it tastes great! 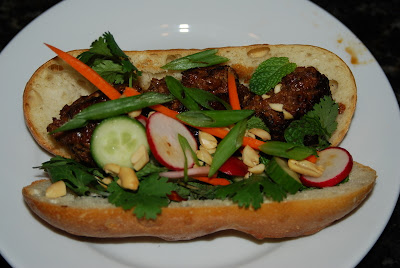 The Lao prefer to have their food very bitter, unlike the Thai or Vietnamese, who tend to have more of a sweet component to round things out. Traditional Lao food relies heavily on vegetables such as raw baby eggplant, and occasionally a very strong flavoring whose name translates to "spicy wood" and that tastes like a combination of ginger, cinnamon, and tree bark. But like in Vietnam the food here tends to use a lot of fresh herbs - cilantro, scallion, and morning glory especially. There are rice noodle soups and baguette sandwiches here that remind me of pho and banh mi from Vietnam, and fried noodle dishes and curries scented with lemongrass and coconut milk that show the Thai influence. And like many Asian countries, the street markets are dominated by the sweet smell of meats (especially pork, chicken, and small birds) and fish (river fish in this landlocked country hugging the Mekong) grilling over open flame. It has been a joy to visit Laos and to eat my way around.

For this recipe I took a street food concept - the meatball skewer - which to me was a snack, but made it into a more substantial meal. The meatballs are flavorful, with hints of ginger and lemongrass, but the fish sauce, honey, and tamarind glaze is what puts this dish over the top (and the added sweetness aligns it a little better with a normal Western palate). Stuff the meatballs into a french demi-baguette and top with cilantro, carrots, and cucumber to get an amazingly flavorful and satisfying sandwich.

Here are the ingredients that you will need: 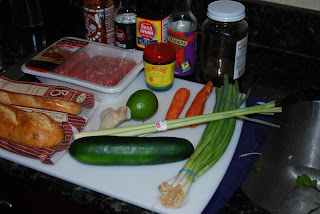 Combine the fish sauce, rice wine vinegar, honey, Sriracha, and tamarind paste in a large bowl, then transfer half of the mixture into a small sauce pan and set aside. Pull out the soft filling of each baguette and add it to the large bowl along with the scallions, grated ginger, grated lemongrass, and ground pork. Mix with your hands until well incorporated. Place the mixture in the fridge to marinate for 20 minutes up to 24 hours, or freeze for later use.

For the glaze add the water and non-grated lemongrass and ginger to the sauce pan. Bring to a simmer and reduce until it coats the back of a spoon, about 10-15 minutes.

Now it's time to start preparing the meatballs: remove the marinated pork meat from the refrigerator and form about 10-15 small meatballs. Saute the meatballs in a nonstick skillet until brown, then transfer them to a baking sheet and into a preheated 400 degree oven. Baste the meatballs with the glaze every 3-5 minutes for about 10 minutes, or until a nice thick lacquer has developed.

Place the meatballs into the demi-baguette and top with thin slices of carrot, cilantro, mint, scallion, peanuts, and pickled cucumber and radishes. Enjoy!